The early days of ultimate were a little different than playing today. Although there were many great athletes, good handlers were few. A team was lucky if they had players with a variety of throws and really lucky if there were players that could be trusted to hold hyzer upwind with any throw. Today, ultimate playing skills have improved. The articles on this site detail training for more throwing power and one-hand catching skills. The same training used for overall power events and skills for other disc sports can be used to learn, improve and maintain handling skills for ultimate.

To improve and maintain playing skills in any sport, it helps to include training activities that can isolate playing skills that are required for that sport. Top athletes in any sport will regularly choose similar sports and exercises for cross-training. All disc sports have specific disc skills that are related to ultimate and can be an excellent cross-trainer for disc athletes.

It wasn’t common knowledge for players in the early days; we just played all of the disc sports. There were clear benefits, disc golf for hucking, pulling, and accuracy, freestyle and double-disc court (DDC) for all handling skills; and guts for one-hand catching and power throwing.

It may be half a century later, but the same benefits of cross-training still apply. Ultimate is fast becoming the breakout disc sport of the future. Although I would never want to see freestyle moves included in the game of ultimate, ultimate players should consider the playing benefits that can come from other disc sports, especially freestyle as an excellent throw and catch handling exercise.

Guts Frisbee was our first organized disc sport, but throw-and-catch freestyle was Frisbee’s first activity. The touring freestyle performers in the 1970s through their demonstrations showed people that the Frisbee was more than just recreation with a beach toy. Competitive disc sports like ultimate and disc golf are excellent flying disc sports that have grown in popularity, but as a skilled activity, there’s nothing more self-challenging and uniquely suited for developing disc handling skills than freestyle. The earliest introduction of the ultimate game was played as a backhand passing and mostly two-hand catching activity. In the early 70s, many of ultimate’s first players became excellent disc athletes and some became very accomplished freestylers. Throwing variety was early freestyle play, freestylers, as part of their sport, invented and developed all of the advanced throwing techniques that are now used in all of today’s disc sports, including ultimate. Freestylers were some of the sport’s first good handlers and early innovators, introducing the big throwing styles that make ultimate the fun passing game it is today.

“Freestyle can be a unique training exercise, not necessarily for turning ultimate players into freestylers, but simply as an excellent cross-trainer for improving an ultimate player’s skills for handling the disc.”

Exercise and training shouldn’t be work, to get maximum results, it needs to be fun. Freestyle isn’t just a game or a sport, it’s a skill set that will up your throwing and catching game, especially with quick throwing variety and one-hand catching situations. For ultimate players that already have excellent handling skills, it could just be a challenging way to improve and maintain them. For the ultimate player just starting, it could be an additional fun way to get them. Since there are elements of freestyle play in every disc sport, disc athletes, especially in ultimate, should consider a simple form of regular freestyle play as recreation and handler practice.

There are several YouTube videos showing freestyle, but most focus on air-bounce throws and nail-delay moves. This isn’t the type of freestyle you are looking for. The non-use of delay aids (plastic nails and silicone sprays) will put you on the right path for a throw-and-catch fast-freestyle and handling exercise.

Freestyle doesn’t have to be a strict practice, although it can be. It could also just be more of an experimental (freestyle) attitude whenever you feel like playing with the disc as recreation or warm-up. Having a specific exercise for practicing just your disc skills along with your ultimate play will help you to develop excellent handling skills.

I’ve seen videos that are being produced by a few of today’s elite ultimate players of their versions of uncommon throwing possibilities. Rowan McDonnell is a shining example; although he demonstrates a few new variations, most are throws that were used in early freestyle. We lumped them together as “freestyle throws” and they were a big part of playing freestyle before 1975. This is the type of freestyle throwing that I recommend for a throw-and-catch freestyle handle exercise.

Even though you’re highly unlikely to use all of these throwing variations specifically in game situations, just adding these freestyle throwing variations in practice will improve your abilities, especially for beginning and intermediate players. They also prepare you for playing in adverse conditions like wind, rain, cold, or just against a great defense.

Becoming a cutting threat with a variety of throwing techniques that can attack with the disc before the defense has a chance to reset is highly effective, as McDonnell has demonstrated in his success. Adding basic freestyle catching to the freestyle throwing techniques being demonstrated by Rowan, in his video, is the training exercise this article is promoting. It will not only improve the variety of your throws but also improve and quicken your ability to transition between your catch and throwing readiness.

You can never have too many disc skills for ultimate. 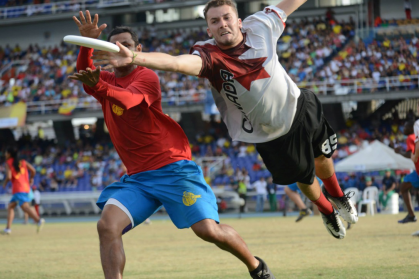 “Two-hand catching wrongly assumes a kind of offensive privilege. Once the disc is in the air, it belongs to no one. Squaring your shoulders for a two-hand clap or rim catch can leave you more vulnerable to a block. Ultimate players should train to improve their one-hand catching skills.”

Ultimate players might wonder what freestyle catching has to do with two-hand rim and clap catching. There’s little to be gained in that area, but freestyle can give you the one-hand catching skill and confidence to not always have to rely on both of your hands for catching.

When you’re running down the ultimate field under a disc about to make a catch, a two-handed rim or clap catch is not always possible or the best idea, especially when a defender is near. To help prevent blocks, always make the first possible contact with the disc, by reaching out with one hand.

In fast-freestyle, one-hand catches are always obstructed by your own body, with many catches being blind (when you can’t see the disc go into your hand). When I played ultimate, my question to my team would always be, “Why do you use two hands to catch?” Many would answer that they were afraid that they might drop it, that would be the wrong answer. I would then instruct them on the physics involved in catching the spinning disc with either hand.

Going “Back to the Future”

If there were two ultimate teams that were equal in every way but in addition one team had freestyle skills. I would wager that the team with freestyle skills would win every game.

“In the past, ultimate players, playing many disc sports, including freestyle, were not played for training purposes, but looking back, that is exactly what playing these different disc sports offered. In the future, when ultimate teams are looking for every competitive edge, a freestyle throw and catch option, as a cross-trainer, will become an integral part of ultimate players training for improved handling skills.”