Author: Ken Westerfield is a Hall of Fame inductee in freestyle, ultimate,

and disc golf. Westerfield was a 1960s freestyle, ultimate and disc golf  top overall competitor with MTA and Distance world records in the 1970s. As a tournament organizer and a showman, Ken pioneered Frisbee and disc sports in the U.S. and Canada.

This article was published in Ultiworld on Sept 15, 2020.
Tuesday Tips: Gain Distance With 360 Degree Pulls

Every pass is a block and turnover opportunity, and elite defenses go to great lengths to design and implement advanced strategies that improve their odds of generating a block. Yet poor pulling often means offenses are given the opportunity to run a play and jumpstart their move up the field before a defense even arrives and gets set. Allowing unmarked passes at the beginning of play after the pull can add up to 15-20 missed block or turnover opportunities per game. In big games, it’s the little things that will make a difference. In the two Frisbee pulling articles on this site, “ Backhand Frisbee Pull,” and “360 Whip Forehand Throw”  Ken Westerfield offers you a way to increase your power for ultimate’s two primary throws called the huck and pull. A consistent, strong, accurate pull that floats slowly to the back of your opponent’s end-zone is an important part of your defense. This gives the defense set-up time with the maximum amount of playing field to defend and control the tempo by having a marked receiver before the first pass. Every pass is a block and turnover opportunity, and there’s no reason it shouldn’t be on the first pass.

360 Backhand Pull for Distance and Float. 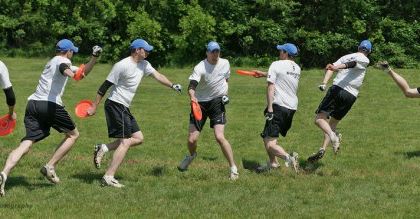 I’ve noticed pulling techniques ultimate teams are using as a defensive strategy. Pullers throwing high steep curves hoping that it will either be dropped or hit the ground and roll past the receiver. Another pulling technique is to throw a roller out of bounds around mid-field, allowing more time to set up the defense and a double-team sideline press. These pulling efforts offer some advantages sometimes, but when maximum defensive field position is required, how about using a technique for pulling the disc farther with more float by developing a “360-degree body rotation” before the backhand release that top distance throwers use. For simplification in this article, I’ll also refer to it as a “360 backhand,” or just “360.”

“There is a reason a discus thrower will use a multiple spinning technique before a release.”

Today’s standard backhand that moves across the front of the body is fine for passing and even hucking, but if you would like to have additional power for pulling, adding more arm to the throw will be helpful. Maybe you already have decent power for pulling, but there are always situations, especially with the wind you will wish you had more. In distance competitions, top backhand distance throwers always use a 360 rotation before the release. First introduced in the late 1970s, this Frisbee distance technique began with overall power event competitors in the 1980s. A 360 body rotation before the backhand release can give you the additional throwing power for an extra 10-20 yards and help to power through erratic winds, this isn’t a theory, it’s physics. Adding upper body rotation will increase arm speed that will translate into more power. That extra throwing power can help you reach the back of the end-zone, take on headwinds and add more disc spin for height and better float. When today’s top distance throwers use the 360 backhand, it’s quick and somewhat inaccurate. Distance throwers use beveled edge golf discs, throwing for 200 plus yards, looking for wind assist with little thought for accuracy. A slow, controlled 360 before you pull with a short run or walk up to the line will help you to add power.

The players in these videos are each using slightly different 360 techniques, but all are equally effective. The videos were made using golf disc, but the 360 backhand grip and release would be the same for an ultimate pull.

I’ve never heard anyone complain of having too much throwing-power. Except for the players that don’t have it and their excuses for not needing it.”

As a backhand thrower, you have already developed the back half of the 360 and release, this will stay the same. Adding the beginning half of the 360 won’t take long to perfect and maintain your accuracy on longer distances.
Every top distance thrower has a variation of this 360 technique before the release. None have been proven to be better than others and since you are not looking to throw 200 plus yards, whatever works for you will be fine. To begin, I’ll describe what worked for me. As an active ultimate player, you already have the backhand throw. Adding a 360 rotation before the release won’t take long and you will feel the extra power right away.

If you’re anything like me, I was never good at following directions. Just begin with whatever your idea is of what you think I described and your athletic ability and ultimate disc skills will take over.

“Adding a 360-degree whip to your forehand throw will translate into more control, speed, and power.” 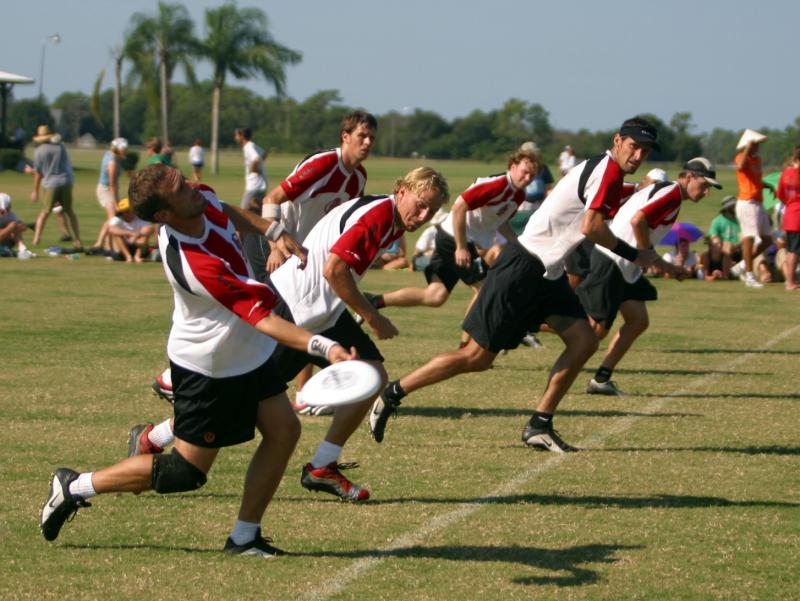 Today, every top ultimate player has a decent forehand pass. If you would also like to develop a power forehand for the huck and pull, I have a power throwing technique I call a “360-whip forehand.” This technique will increase speed for your huck and distance with float for your pull. Even against erratic headwinds adding a 360 whip to your forehand will help to power your pull to the back of your opponent’s end-zone or hit a forward with a speedy huck before the defense has had time to respond. The “360 whip forehand,” is thrown with a slightly different release, then a pass. Adding a 360-degree arm whip motion visually compares to a third baseman scooping up the ground ball and sidearm throwing the runner out at first.

History note: Prior to the invention of today’s beveled edge golf disc, the two longest distance throws ever recorded using the old rounded rim disc designs that include the Wham-O World Class Models and the Discraft Ultra-Star are Victor Malafronte’s 538 feet and Ken Westerfield’s 552 feet in the 1970s. Both throwers used the run-up and 360-whip forehand techniques described in this article. Both distance record throws were with a 119gm 40 mold World Class Frisbee.

A power forehand demonstration video, using his 360-degree whip. In this video, Ken Westerfield is throwing distance with a Wham-O Midnight Flyer Frisbee (140-150grams) in the 1970s, but he also used this same technique for ultimate pulls with a 175g Ultra-Star. This is a Super 8 film and a little fuzzy, but you can see the full 360-degree arm whip (rotation) before the release and the throw off the left foot. Without the run-up and in the moments before being physically marked, the 360 whip forehand can also add power and speed to a fast downfield huck.

The grip is the same as a pass, just slightly firmer. Two fingers together underneath with the thumb on top, pushing hard enough to indent the top of the disc. A tight grip will give you a better wrist snap to hold hyzer (inside-out) and more disc spin for a slower float at the end of the pull.

Adding a little more arm to the forehand throw isn’t that difficult. Begin by standing still and doing the 360 arm rotation with the disc in your hand. Take 10-20 Ultra-Stars, and standing in a still position, begin throwing using this full forehand 360 rotation with the disc. I can almost guarantee that with the first few throws, the disc will turnover. By the time you have thrown 20 Ultra-Stars you’ll begin holding hyzer. The disc might have a little release flutter, but with practice, you’ll strengthen your wrist and develop your timing. There are no shortcuts or better words to a faster result. Repetition and muscle memory are key until you get the timing of the release. Begin by focusing just on the arm rotation and the release. Once you get the throw you can add in a walk-up. If you are practicing pulls with your right hand, begin by using two steps. Step with the right foot, then take a step to the left. This is your release foot, as you take that step to the left since you will be throwing for more distance, you will want to lean over a little to your right as you release, this will help to swing your hip out of the way allowing for more release hyzer. Two steps is all you’ll need to start, you can add as many steps as you like, whether you prefer the walk or run-up to the line. The run-up doesn’t add that much more to the throw. Barring extreme wind conditions, especially headwinds, I could always reach the back of the end zone with good height with the walk-up but would usually run-up to the line with my team, just to add to the team psych and momentum.

Winning an ultimate game is about athleticism, conditioning, handling skills, and confidence. It is also about playing strategically smart, taking advantage of every opportunity that falls within the Spirit of the Game. The psychology of a game depends on the level you are playing on. When the puller, usually assumed to be the team’s strongest thrower, makes that first throw to begin play, it represents the team. Just as weak and inaccurate pulls can say something about a team, a powerful pull will also say something about a team. Let your opponents know, right at the start, that there will be no free passes. A consistent, powerful pull will psych up your team, excite the spectators, and help to send your game-winning message.